What is Internet Activism?

How is it done? 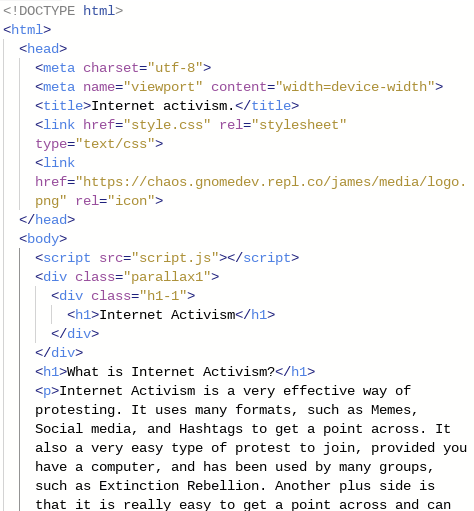 That was a screenshot of this website in very, very early development stages.

How do you feel about using # (pound) for groups. As in #barcamp [msg]? 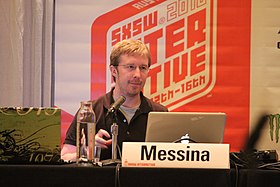 Chris Messina, the creator of the hashtag.

If you're curious, BarCamp is an internet themed network of conferences, and another name for # is pound.

The share button is possibly the best button for people who want to be heard. It is a simple idea, but an ingenious one, and the reason for many success stories. Tom Scott, a YouTuber, once made a quiz called the North-O-Meter, shown below. 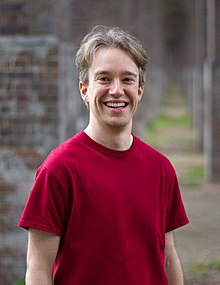 Tom Scott, the creator of the North-O-Meter.

Now for a protest made more popular by the internet! 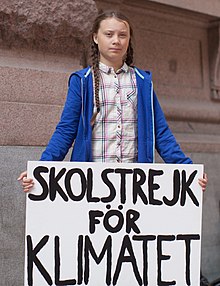 On the 20th August 2018, Greta Thunberg, then in the Ninth Grade, the equivalent of year 10 in Britain, decided to skip school and protest outside the Riksdag, the Swedish Houses of Parliament until the Swedish General Election on the 9th of September after heatwaves and wildfires in Sweden.

Groups such as Extintion Rebellion, whose logo is shown above, aided, and the world noticed. And this time, the world acted. A bit. So they protested more. And more. And on 15th March 2019, there was the first global climate strike.

Clearly, there are people who want governments to act. Why shouldn't they act? #FridaysForFuture

I saw some of this for myself, as while I was visiting Cambridge at the end of the half term holiday, there was an Extintion rebellion protest going on, and they handed out leaflets to passers by. They had recently dug up Trinity College's lawn because Trinity College has ties with fossil fuel companies. 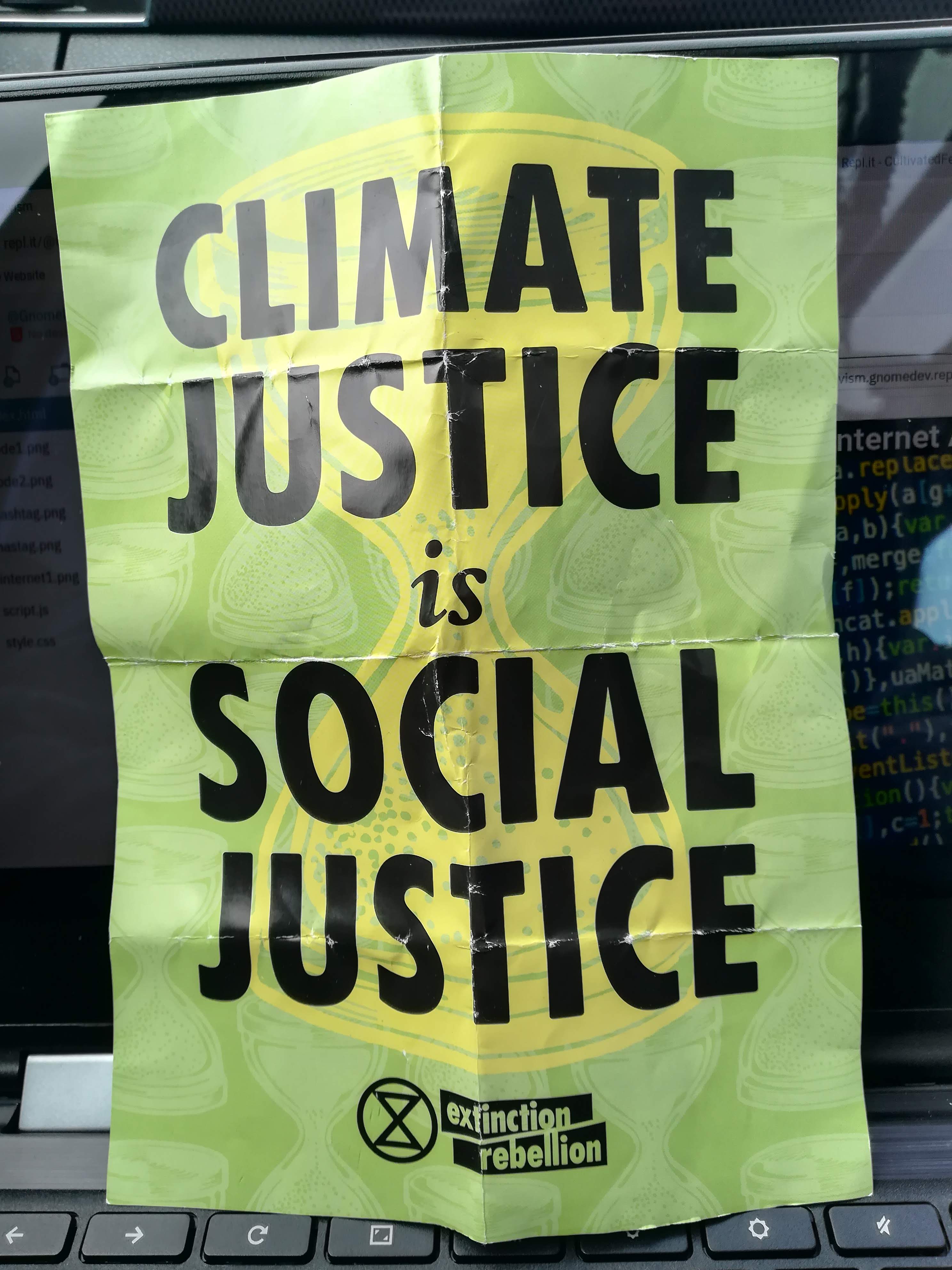 The leaflet I was given, clearly made on a computer. 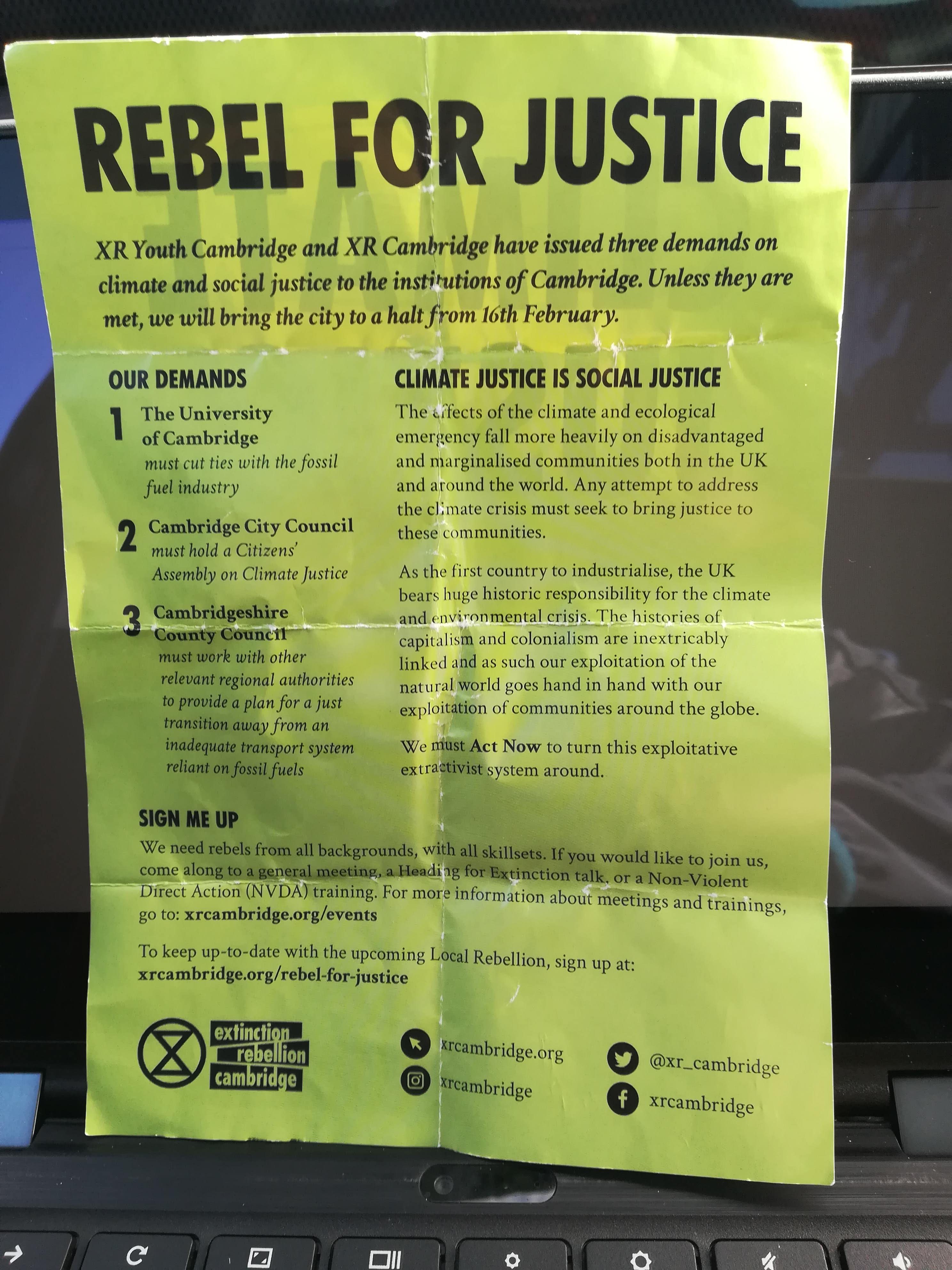 The reverse of the leaflet

This leaflet contains good information about what XR Cambridge's demands are, and why, but the most important part is how to find them online.

The 2019-2020 Hong Kong protests are ongoing protests in Hong Kong caused by the Fugitive Offenders amendment bill being introduced by the Hong Kong government. The bill would have allowed the extradition of criminals who are wanted in other Chinese territories, which would undermine the autonomy of the region. 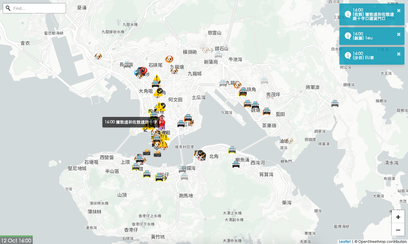 This website has been helpful to the protesters, as they can prepare for the police, and possibly move out of the way. It works by gathering data about police patrols and tear gas deployments from an app called Telegram, which is practically WhatsApp. However, the internet hasn't been completely helpful to the Hong Kong protests...

The internet is helpful to Protests, but it can also be a hindrance.

One example of a protest online... made by ME!

If I can make a website that looks and functions well, then surely there are more examples of people who have set up joke websites? Yes!

On the 26th July 2004, the UK Government launched a scheme called "Preparing for emergencies".

Negotiate using sign language, if possible. Failing that, and assuming they aren't armed with futuristic ray guns, run like hell.

Preparing for an emergency

Look, it's an emergency. How are you supposed to prepare for it? It's in the [redacted] dictionary. " A serious situation or occurrence that happens unexpectedly and demands immediate action." If you expect it, it's not an emergency, is it? Honestly.

In a video explaining what happened, Tom Scott, the creator, set it up, emailed it to a few friends, and went to bed. The next day, he opened his inbox to find some emails...

The website wasn't taken down, but after adding a link to the actual website, the threats stopped.

The joke logo for the Preparing for Emergencies site, with the imaginary HM Department of Vague Paranoia logo attached.

The reason I have shown you these last two websites is because it is really easy to set up a joke website.

On the 5th November 1994, a DDoS (Distributed Denial of Service) attack happened on the government in the form of an email bomb. This is an aggressive type of internet activism. The attacks were carried out by the Zippies, a group from San Francisco, who were not in favour of John Major's Criminal Justice bill, which outlawed outdoor raves.

Hacktivism is not the most effective type of activism. It is comparable to Vandalism, just more expensive. It can also be amazing how weak some security systems are. On Wikipedia, there is a list of notable hacktivism events, and the craziest one I could see was:

In August 2011 a member of Anonymous working under the name "Oliver Tucket" took control of the Syrian Defense Ministry website and added an Israeli government web portal in addition to changing the mail server for the website to one belonging to the Chinese navy.

I mean come on.

There is a law called Sturgeon's law which goes like this "90% of everything is terrible". It was coined by a critic called Theodore Sturgeon, who remarked the same thing about Science Fiction, but later realised that it applies to everything in media, and it is really relevant to the internet. 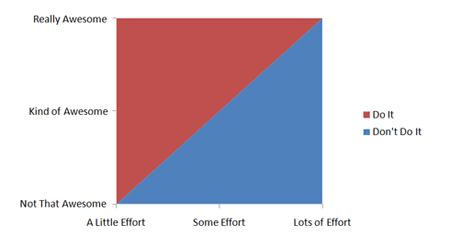 Thank you for watching!

Coded in HTML and CSS by James Young

Visit chaos.gnomedev.repl.co/james for my homepage. This presentation took nearly 300 lines of HTML and nearly 200 lines of CSS to make in 20+ hours. Thank you to Tom Scott for making the preparingforemergencies.co.uk website, the North-O-Meter and the Effort to Awesomeness graph and making videos about them, as well as a video about Sturgeon's law. Thank you to W3Schools and CodeCademy for teaching me how to make a website, to Extinction Rebellion Cambridge for handing out a leaflet, to Wikipedia for most of the information, and to Repl.it for their superb website editor and hosting service.